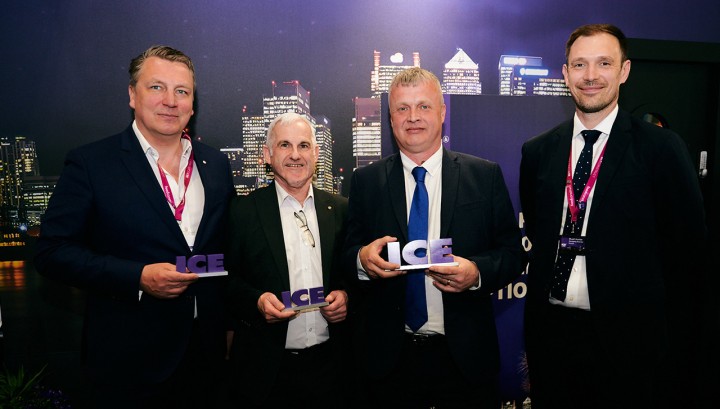 Merkur UK celebrated a hattrick of achievements at April’s ICE London with the brand receiving three Landmark Awards which were presented on the show floor by Clarion Gaming Managing Director, Stuart Hunter. The ‘Landmarks’ which were introduced to the world’s biggest gambling and betting show in 2019, recognise the extraordinary achievements and successes of individuals and organisations and are based on nominations received from within the industry.

The Merkur recipients were led by UK General Manager Sascha Blodau, who accepted the Award in recognition of the industry acclaimed Merkur 360 Program which has raised the bar in terms of safer gambling undertakings in the low stake low prize high street gaming entertainment sector. 360 has pioneered the City and Guilds assured training of 200 Venue Managers, the introduction of Customer Experience Groups in which players discuss their personal gambling management techniques with the insight fed back into team development, its self-exclusion system and age verification protocols including the Merkur Think 25 Policy.

Matt Bicknell, joint Managing Director, Regal Gaming Technologies was the next to accept an Award in recognition of how the Digital Transformation investment undertaken by the leading machine operator over the last two-years has been deployed to help reduce its carbon footprint.
Nigel Davis, Merkur UK’s Head of Gaming was awarded a Landmark following a 42-year single company career during which he has played a pivotal role in the development of the UK machine sector including the evolution of Section 16 and 21 categories, advances in data retrieval and his contributions to the TiTO protocols established by the Gambling Business Group.

Explaining the significance of the Awards, Clarion Gaming’s Stuart Hunter said: “The purpose of the Landmark Awards is to recognise those people and organisations that continue to make a difference as well as the reputation that ICE enjoys as being the fulcrum of positive change both during good and in challenging times. The Landmarks are a true celebration of excellence and I congratulate all of our 16 winners.”